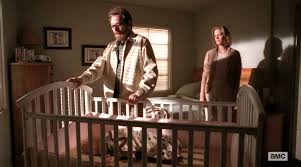 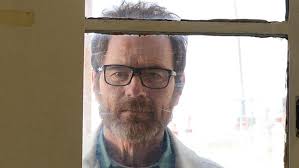 In many ways, the climax of the series was the amazing episode ‘Ozymandius’,  the 6th of this 8, which had formed the basis of a super cool season 5.2 teaser trailer aired over the summer, with Bryan Cranston reading Shelley’s poem. The themes of the poem – that all great rulers and powers will be ruins in a desert one day – was perfect for an episode that killed off Hank, had Skyler tell Walt Jr the truth, a knife fight between Walt and Skyler, Walt snatching baby Holly and making a run for it, some of THE best baby acting ever and then a horrible painful phone call from Walt, where he really lays into Skyler for being a bitch and never believing in him etc. Did he know the police were listening in? Of course. Was there a grain of truth in his horrible diatribe? Yes probably. Vince Gilligan himself said Ozymandius was their best ever episode and it’s hard to disagree. Just gut-punchingly powerful.

The final episode was an odd one in a way. After all this time building him up to be a vile human being, Walt gets to be the good guy again. He makes amends with Skyler, but owns up to being in the meth business because he liked it and was good at it. Bumps off Lydia and the neo-Nazi gang who killed Hank, lets Skyler know where to find Hank’s body,  frees Jesse, arranges for his family to get his money and then apparently dies in the lab Jesse had been enslaved in.

As I watched it, I enjoyed it a lot and liked that they tied up all the lose ends. However, in retrospect, it was a little too neat and sort of fed in to the beliefs of people who saw Walt as a true hero despite all the awful things he did. Walt was the protagonist, and a totally fascinating character, but he was not someone to be admired in any way. You can sympathise with him, and Bryan Cranston is a huge part of that. But did Walt really deserve the pretty noble death he got?

In the penultimate episode, ‘Granite State’, Walt is in hiding in a snow bound cabin in New Hampshire. He talks to his one contact – Saul’s fixer guy – about him one day turning up with supplies and finding Walt dead from the returned cancer. Walt asks him if he would keep Walt’s money or make sure his family got it. The dude doesn’t look like he’s be a respecter of Walt’s wishes.

Some critics did discuss the idea of all Walt’s plans coming to fruition all being a dream of his – rejected by Gilligan and co however. But I’d like there to have been a smidgen of ambiguity about it. Perhaps as Walt lies on the floor of the lab, we get a brief flash of the cabin in New Hampshire and are left wondering whether this is his Jacob’s Ladder moment – a life lived in the moments before death. One of my very favourite TV critics Maureen Ryan was deeply unhappy with the finale in that it really let Walt off the hook big time. Something that seemed so unlikely for the first 4 seasons and 15 out of the 16 episodes of season 5. However, for me, despite everything, I did still root for Walt. He had to die, but I didn’t begrudge him a chance to make amends after being such a bastard for most of the show!

I still think season 4 was probably the show’s high point as a drama, but wow there were some powerful scenes this year. Such a well written, well acted show.